I came across this article (and more importantly these pictures) while doing my daily surfing through the news feeds. Remind me not to go swimming in Alabama anytime soon.

Wait a second: We swim in the Gulf with creatures like this? Hmmmm
Posted by Jeff Dute, Outdoors Editor July 20, 2009 5:55 PM

DAUPHIN ISLAND -- It was odd-fellows day at the scales at the 77th Alabama Deep Sea fishing Rodeo on Saturday and people still can't stop talking about the catches.

Sure, there are plenty of mutant-type fish weighed in the "regular" categories. I mean, you just don't see every day a 64-pound king mackerel or 120-pound amberjack like those brought Friday. Fish like these rightfully create an electric buzz around the scale.

You also don't often see Dr. Bob Shipp, dean of marine sciences at the University of South Alabama, who's been a rodeo judge since 1980, leave the weigh station to photograph a fish. He did that twice to snap shots of Joey Lapeyrouse's huge king mackerel.

But if you really want to see Shipp's eyes light up, lay something in front of him like a long-tail bass or lesser electric eel or something with a name like cubbuyu or guaguanche. Just the names cubbuyu and guaguanche are so out of the norm, the things bearing them just beg to be poked and prodded, "oohed" and "awed" over, and photographed and photographed. The names make the spell-check on my computer do a double-take, too.

While the cubbuyu, a relative of the barracuda, is pretty cool to look at, it can't hold a candle to the king snake eel, at least in terms of enticing an audible gasp from any spectator lucky enough to see it.

That happened late Saturday when Jim Waller's 6-foot king snake eel was hoisted from the dock cart so it could be photographed repeatedly. Throw in the moment later when Bryan Dean's conger eel was pulled from the same cart, and you have the makings of some pretty awesome looks on the faces in the crowd.

I even saw one small boy ease closer to his mom when those two evil-looking creatures were pulled out. It almost made you want to hug the kid. 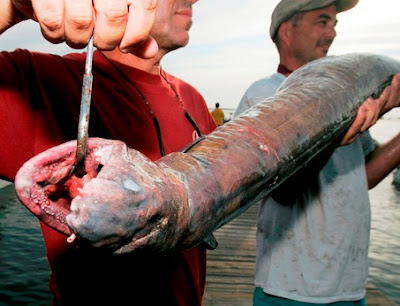 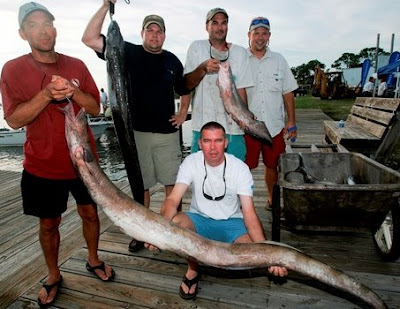 Read the whole Press-Register article here:
http://blog.al.com/live/2009/07/wait_a_second_we_swim_in_the_g.html
(The comments section is quite lively!)
Posted by Michael Agneta at 1:06 PM