All is well in the world. The Sixers announced today they are burying the Allen Iverson-era Black, White, Gold, etc...colors and going back to the patriotic Red, White, & Blue. Love it!

The 76ers are bringing retro back.

Today in the lobby of the Comcast Center, the Sixers re-launched the red, white, and blue logo they first used in 1963, putting away the modern black, silver, and gold logo they have been using since the 1997-98 season.

"By bringing back the old Sixers logo, we are connecting the past with the future," Snider said. "This logo evokes some of this franchise's proudest moments. We also made this change because we understood how much this logo means to our fans, the franchise, and to our city."

Stefanski said the organization reached out to fans and received an "overwhelming" response to return to the old logo and uniforms. 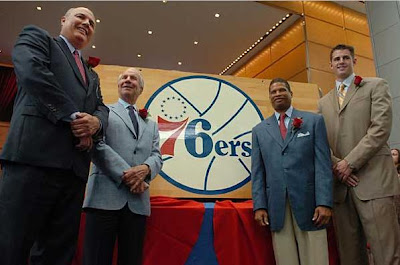