Went to Stony Creek in Norristown this AM. It was cloudy and cool weather-wise, with a little bit of off & on spitting drizzle. No biggie. Rolled into the Norristown Farm Park parking lot around 7AM, and there were already some folks hanging out at the dam. I call these guys the "PowerBait Brigade" because they can seemingly sit there for hours, just floating PowerBait. I have nothing against PowerBait, I could just never do that, my mind would go numb. 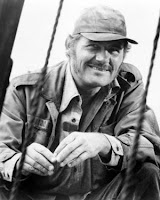 There was one character there who provided some comic relief as well. All morning, he insisted on telling anybody & everybody that walked by (no matter if they wanted to hear or not) about the HUGE trout he got up to the bank, but made one last run on him and broke off his line. Seriously, he sounded like Captain Quint describing an encounter with JAWS.

Anyway, I didn't fish the dam (I never do), I went quite a bit upstream to some other runs and pools. I started out the morning using spinning gear and in no time landed an nice Rainbow on a Wyld Edge spinner. I was also using Bioline biodegradable fishing line (review to come) for the first time. After that though, I thought I'd switch it up and grab my fly rod. On the way back to the car, I of course heard the JAWS story for the second time, which made me laugh.

The fly gear wasn't as productive as I hoped. My casting still isn't where it should be, so it was no surprise that the fish weren't taking my offerings. I'm sure they were simply looking up at me and snickering to themselves, thinking "idiot."

After wasting about an hour on that, went back to the car (heard the JAWS story yet again, comedy quotient increases with additional exposure), and grabbed the spinning tackle once more. Hiked back in and ended up bringing in a few brookies & 'bows on some Fish Creek Spinners Armadillos. Nothing really outstanding, but this one mutant stockie - well...I'll probaby have nightmares about his ugly mug tonight. He looked like Freddie Krueger's spawn. He was really thick though - and put up a pretty nice fight considering he had the torn up pectoral fins typical of a stocked fish. He was pretty stupid though. I let him go and caught him again less than ten minutes later on the same spinner. Who's the idiot now? 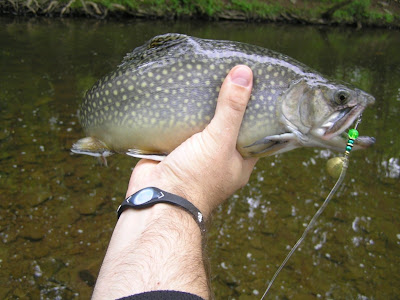 Posted by Michael Agneta at 9:12 PM