A few weeks ago, I decided to get all eco-crunchy and picked up some spools of Bioline to celebrate Earth Day. Figured if the stuff is really biodegradable as they claim, it would be much better to use this than standard mono (which pretty much will never breakdown)...as long as it performs okay. I used/tested the 4-lb version on 2 recent outings (a week apart from each other), and here are my findings. 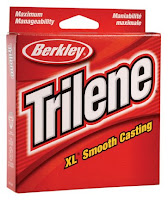 First off, let me preface this review in saying that I'm typically a Berkley Trilene XL user. I've used other variations (Trilene Sensation) and other products all together (Stren Original, Bass Pro Tourney Tough, etc...) but always tend to gravitate back toward Trilene XL. Thus, most of the comparisons I make will be using Trilene XL as the reference point.

Packaging: Bioline comes on a plastic spool sealed in a resealable zipper pouch instead of a cardboard box. The manufacturer suggests that as long as you keep it sealed in the pouch, all should be good for 10-12 months. The zipper on the pouch feels to be good quality, so there's no fear on my part that I may have zipped it closed but it not have sealed. The spool is pretty standard, nothing fancy, however there is a little metal line keeper on the back of the plastic spool to keep the tag end of the line under control and the line on the spool. Nice touch.

Spooling: Taking the line off the spool and putting on to my reel, two things stuck out immediately. The first was that the line was a bit thicker in diameter than the Trilene I usually use. This is only minor, not a negative, just an observation. One thing I didn't like though (the second) is that the line seemed to be a bit stiff and have some "memory" already baked into it from sitting on the spool. It came off with a slight coil to it, something that would rear its head a little bit later.

Knots: Being that the line has a slightly thicker diameter, tying knots was actually easier than with Trilene XL. In tying Improved Clinch Knots in each, the knot was much cleaner with the Bioline. Nice!

Casting: All of the stuff I wrote about so far was good, but didn't have much to do with performance...this does. Freshly loaded on 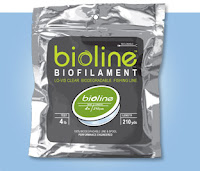 my ultralight reel (a Pflueger Trion 4520GX) and tossing #3 Wyld Edge Bezerkers, the coiling I previously mentioned definitely impacted my casting. I estimate I lost about 3 or 4 feet from my cast. Not awful, but not good either. Additionally, I seemed to be having issues with line twist that were increasing in severity with each cast. I was even being a good angler and flipping the bail by hand, but the line just didn't want to behave on the reel.

I thought I might have overloaded the reel so I stripped off about 20 yards to see if that would help any, and it seemed to help slightly. After playing with several variables such as this for about the first hour on the stream, the line settled in a bit and was more fishable. That being said, I would not recommend it for throwing extremely light lures like a Joe's Flies. I tried, and just couldn't get the desired distance.

Strength: This is a very strong point of this line. This line is very strong for it's rating when compared to Trilene XL. When tossing spinners, it's inevitable that you'll get snagged either on a rock, a submerged branch, something...and won't be able to work free. With the Trilene, I usually just have to grab the line, give a quick snap of my wrist and it will break off at the knot. With the Bioline, I actually had to pull quite a bit to break it off. Interestingly, when the Trilene breaks off, it comes back with a slight curl from being stretched, but the Bioline comes back in almost a bird's nest. It's not a big deal since you usually trim that bit off anyway, but another observation. The strength also came into play while "playing" a nice size brook trout. I would say the Bioline has slightly less "give" or stretch in it than Trilene, so I was actually able to land the fish much quicker without concern of damaging or breaking off the line.

Durability: I was curious to see how it would hold up over the course of a week if it got wet the previous week. So I made sure at the close of Week #1, I let out a few long casts, gave the line a good soaking, and reeled it back in. I left that same length of line on my reel and to my surprise, it displayed no ill effects when fished again 7 days later. It seemed just as strong as before and I actually may argue it performed a bit better when it came to coiling. 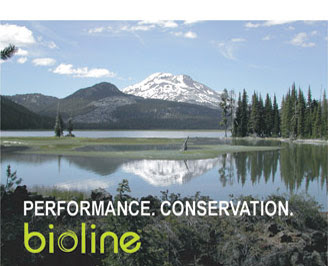 Summary: Had I just fished this line the first weekend, I probably wouldn't have given it a favorable review. There were just too many performance issues. However, after tweaking how much I spooled on to my reel and choosing some lures with some adequate weight, it was definitely a fishable line.

Would I say it performs better than Berkley Trilene XL? Probably not for an ultralight fisherman like me. In my opinion Berkely XL has far less line memory and casts (especially light lures) quite a bit farther. However, if being eco-friendly is paramount, this would be a legitimate option. It does cost more ($13 vs. $6) but the line ties excellent knots and is extremely rugged & durable. Bioline actually reminds me of Stren Original in that regard. I would suggest to load your reel with only about 1/2 to 3/4 of the amount of line you normally would. Bioline just seemed to cast better with less line on the reel.

Posted by Michael Agneta at 9:10 PM