Once In A Blue Moon DVD Review

My copy of the 'Once In A Blue Moon DVD' arrived today. (You can pick one up for yourself at Stu's Orgasmic Fly Shop or at Amazon.com).

From the back of the DVD box, the basic summary of the film is as follows: 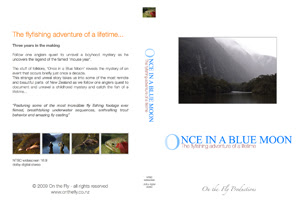 "The stuff of folklore, ‘Once in a Blue Moon’ unravels the mystery of an event that occurs briefly once a decade. This strange and unreal journey takes us into some of the most remote and beautiful parts of New Zealand as we follow one anglers quest to document and unravel a childhood mystery and catch the fish of a lifetime."

The "mystery of an event" described above is that the mice population swells every few years to the point that there's so many, they become targets for really big brown trout (if they fall into or attempt to swim through the water). This puts the folks making the film on a quest to see if they can not only time the rodent explosion correctly, but also land some of these trout on mice flies...yes, mice flies.