Being a primarily a fishing blog you're probably thinking "JVG?...doesn't he mean KVD?" Yes, Kevin Van Dam is probably the best bass fisherman on the planet, but that's not the direction I'm going here.

Besides fishing, I love almost all team sports. Really all the majors, except hockey (sorry Flyers fans). So after my hometown 76ers had another disappointing season, finishing around .500 and getting bounced in the first round of the playoffs, the quest for a new coach is on.

Unfortunately, most of the candidates they are bringing in for interviews are retreads (as in recycled, not Corky Thatcher). Eddie Jordan, Doug Collins, Jeff Van Gundy...yes, THAT Jeff Van Gundy.

The first thing I think of (and funny enough, as does my wife K.C.) when somebody says 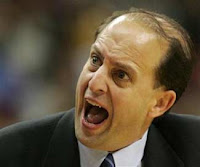 Jeff Van Gundy is the Alonzo Mourning/Larry Johnson/Charles Oakley fight back when he was the coach of the Knicks. For those who aren't familiar with this fight, JVG basically got dragged across the court like a ragdoll, clinging for life in a fetal position around Alonzo Mourning's ankle.

The internet being that amazing repository for the bizarre that it is, I figured I could hop on Google or YouTube and find a video replay of that scuffle in seconds. No luck. Seriously. It's like somebody systematically erased the JVG incident from all digital media records. So if anybody has a link to this video...let me know where I can find it by posting the link in the comments...PLEASE! In the meantime, I'll just have to settle with this still picture. 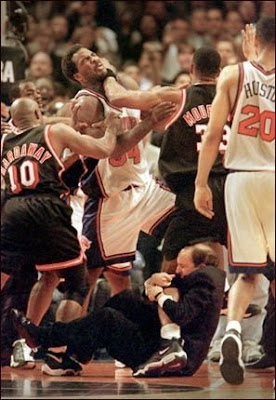 Posted by Michael Agneta at 9:41 PM