In honor of Mexican trout everywhere: 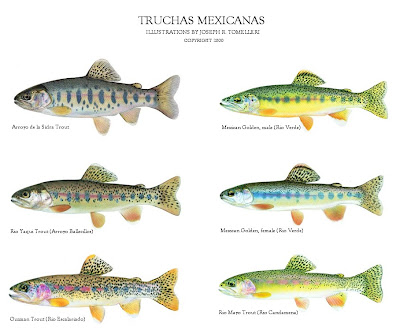 The Mexican Golden Trout has the widest geographical range of any native Mexican trout. The species is found in three large Pacific watersheds of Chihuahua and Durango: the Rio Fuerte, Rio Sinaloa, and the Rio Culiacan. Most of the O. chrysogaster specimens in museum collections are from tributaries of the Rio Fuerte, this drainage being more easily accessed. The status and distribution of the species is poorly known, and only a handful of collections exist from the Sinaloa and Culiacan drainages. Inter-basin populations of the Mexican Golden are quite variable, and when some of the more remote arroyos and barrancas are accessed by scientists, the Mexican Golden may eventually be found to be comprised of different forms, or even different species. Like other trout of mainland Mexico, the Mexican Golden Trout prefers clear and cold headwater streams, mostly above 6000 feet in altitude, and is most abundant some distance from roads and bridges. Males and females are strikingly dimorphic, the females being principally silvery with dark parr marks, and the males exhibiting the beautiful golden colors which give the species it's common name.