Today was opening day in Southeastern PA. I've been excited about this for a few weeks. Opening day might not test your angling skills...but with the incredibly fast action it's a heck of a lot of fun. 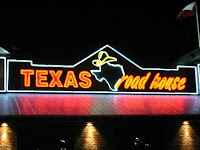 So let me start this post by talking about last night (Friday). I got home from work and K.C. showed off a Texas Roadhouse gift certificate she received for her birthday (tomorrow), so within minutes the three of us were in the car headed toward the restaurant. During dinner, Lilly had a pretty consistent cough. K.C. said she had it all day, and thought it was the croup. Lilly had the croup before, but other than the cough didn't show any symptoms, so we didn't think it was a big deal...

Fast forward to about 11PM on Friday night. Lilly's been asleep for about 3 hours and wakes up screaming and calling for "Daddy." I go upstairs, she's burning up. I called K.C., we took her temperature, and it was 103. Not good. Lilly got to sleep with K.C. & I that night, but to say any of us got much sleep would be an exaggeration - Lilly is quite the bed hog, so K.C. actually bolted for the guest bedroom.

So what does this have to do with opening day? Well, I was planning to get up around 6 AM to ensure my spot at the shoulder-to-shoulder fishing experience that is the 8AM opening day first cast. Well, with no sleep, and unsure how Lilly was going to be feeling, that mission was aborted. I was kind of sad I was going to miss it...but my baby was sick...priorities. Lilly & I got up at about 7:30, and K.C. made up for some lost sleep. 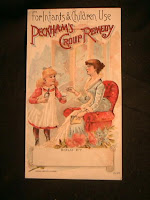 As the morning progressed, Lilly was acting pretty normal. She was a little "out of it" but still pretty happy - watching her cartoons, putting together puzzles, teasing Caesar, etc... Her fever also came down a bit so it appeared the worst was past. When K.C. woke up, she ran some errands (got Lilly some medicine) and gave me the green light to go fishing for a few hours if I wanted.

By now it was about 1PM, and I was off to Darby Creek in Havertown. When I got there, I saw tons of cars & trucks parked alongside the road, but as I hiked down the embankment to my spot on the creek, I was amazed that nobody was there. Absolutely nobody. Perhaps the traffic had left? Perhaps it was because we were having 50 MPH wind gusts? Perhaps it was because the water clarity was poor from a hard rain the prior day? I didn't care, I had the creek to myself on opening day and I was going to make the best of it. 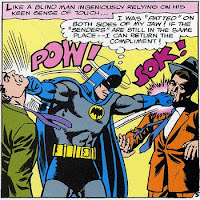 WHAM - BAM - THWAP! Seriously, it was a like Batman comic. Every 3rd or 4th cast a trout was smashing my spinners. I fished a few different types - some homemade spinners, Fish Creek Spinners, Worden's Rooster Tails, and Wyld Edge Bezerkers. Spent most of my time fishing the Wyld Edge lures, because they are J hook spinners and I bend the barb down. Makes it much easier for catch & release.

After a while I stopped counting (and taking pictures), but the count had to be 20 at minimum. Here's a few pics. 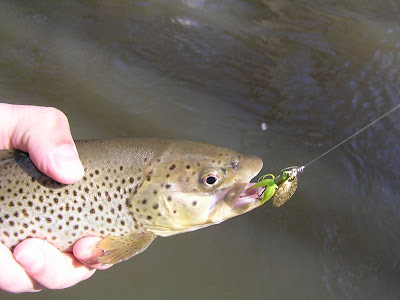 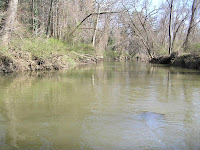 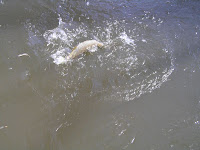 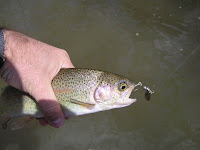 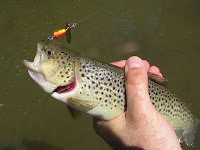 There were no bruisers or trophies in the batch, I'd say most were in the 10 - 12 inch size, but the non-stop action and some of the acrobatic leaps from the water made it an extremely enjoyable couple of hours of fishing. Even better, when I got home K.C. & Lilly were sitting on the sofa watching Cars...no disasters, no debacles, just a Mom & her kid looking a lot better and doing normal kid stuff.
Posted by Michael Agneta at 8:08 PM