I have finally recovered from last week's trip to Florida to the point where I think my thoughts are composed enough to write something about it. I mean this blog is supposed to be about fishing and Lilly...and the trip was definitely all about Lilly.

We started the week in Boca Raton at Mom Mom & G-Daddy's house. Was really nothing out of the ordinary - went to the beach, swam in the pool, fished in the canal, played in the park, did a little shopping, etc... Lilly got yet another birthday cake (& presents) and I'm starting to wonder if she's going to expect a month-long birthday celebration every year. It was nice and relaxing, and the weather was beautiful. They did get a new puppy a couple of months ago - and Lilly had a blast playing with Bil.

From there we packed up into two cars and drove up to Orlando for the weekend. We stayed at a nice timeshare/condo property called Floridays. KC did a writeup of the place on her blog. Lilly just liked jumping on the beds. 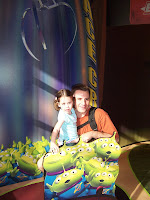 The first day was Disney's Hollywood Studios (formerly MGM). We learned one thing - keep Lilly away from the characters. Much like her encounter with Santa last Christmas, Lilly totally flipped out whenever one of those 7-foot "monsters" went walking by. Let's just say she did not enjoy meeting Buzz Lightyear and Woody. That and there was also some sort of like middle school or high school cheerleading championships - so there were literally thousands of little girls with giant sequin hairbows and bad eye makeup running around. Talk about SCARY! 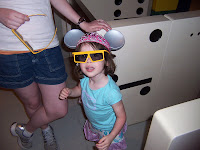 Since Hollywood Studios is more shows & movies than it is rides, Lilly had a good time watching the Little Mermaid & Beauty & The Beast live shows, the Muppets in 4D, and the Toy Story Midway game, but really didn't have as much fun as she did the next day at The Magic Kingdom!!! 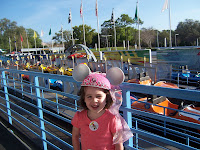 Lilly loved just about everything about the Magic Kingdom. We took the hint from the prior day and kept her away from the characters and everything went great. Lilly went on so many rides, I can't even remember them all, but some highlights were the Indy Raceway, The Mad Tea Party Teacups, Goofy's Barnstormer, 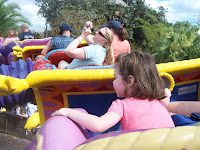 Aladdin's Magic Carpet, Pirates of the Carribbean, the Jungle Cruise, the Carousel, and of course Dumbo. Mommy & Daddy were able to sneak away and get in some rides for kids over 40" tall too! Love that Splash Mountain and Big Thunder Mountain Railroad.

Lilly also got to see the Tiki Bird show in the Tiki Room, but I don't think she was too into that...I have a feeling she's more of a Country Bears gal (or maybe the Hall of Presidents like Daddy - WHICH WAS CLOSED FOR RENOVATIONS!!!)

When we were finally able to pry Lilly away from the rides and begin our trek back to the hotel, she was pretty tired did have a little bit of a meltdown over souvenirs and holding on to her Mickey balloon, but it was a very long day. Fortunately, none of the theatrics dampened the overall mood of the day or trip - in fact Lilly fell asleep in my arms during the shuttle bus ride back to the hotel, a memory I will definitely keep for a very long time.
Posted by Michael Agneta at 12:19 AM