In A Word: HILARIOUS!

As a followup to my "Who Throws A Shoe?" post a few weeks ago, this was too good not to post. When I stumbled upon this news story, I actually had to check and make sure it wasn't April Fools' Day (courtesy of Yahoo & the Associated Press). 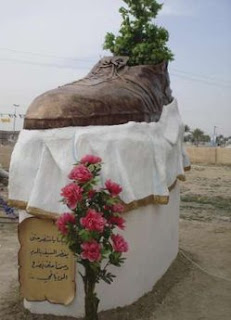 BAGHDAD – The director of an Iraqi orphanage says a sculpture honoring an Iraqi journalist who threw his shoes at former President George W. Bush has been removed.

Fatin al-Nassiri says Iraqi police told her the statue had to be removed from the orphanage in Tikrit because government property should not be used for something with a political bias.

She says the sofa-sized statue of a shoe was taken down on Saturday after being unveiled on Thursday.

Iraqi journalist Muntadhar al-Zeidi threw his shoes during a Dec. 14 news conference in Baghdad. Throwing shoes at someone is a sign of extreme contempt in Arab culture.

So I guess the question I have is now that the shoe has been removed, where is it going to go? If there are no takers, I suggest it be placed outside the Philadelphia Museum of Art (right next to Rocky!) in a homage to "statues exiled from their homes." For those of you who don't know the saga of the Rocky statue ~ just click HERE. 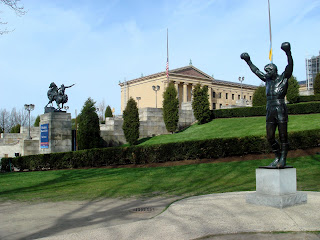 Posted by Michael Agneta at 2:27 PM