So, word on the street was that the Stony Creek Anglers were doing some trout stocking of Stony & Kepner Creeks on Black Friday. Word was true, but unfortunately I was working on Black Friday (oh, the perils of internet retail), so I didn't get a chance to check it out. Plus Lilly has developed a case of the croup, so needed to get home as soon after work as possible to help hold down the fort.

That being said, I did decide to give it a go this (Saturday) morning. Lilly was up all night coughing, so I didn't get much good sleep on Friday night getting up to comfort her and put her back down. I can't really complain though because she's been so miserable with the constant coughing...what a trooper. Anyway, because of that I didn't get as early a start as I wanted to and by the time I got to Stony Creek, most of the good holes were already manned.

I did manage a little fishing, but came up zeros on this brisk 30-degree morning. 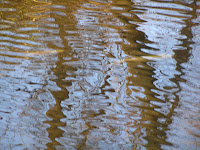 I don't feel that bad about it though, it was nice to get away from the hustle & bustle of holiday retail for a change and just enjoy the sounds of the riffles breaking around my waders. Plus I did take some (poor) pictures of some Golden Rainbow Trout. Some tough glare so all you can really make out is the silhouettes. Some people call them Palominos, but they actually are golden rainbows. There were two of them kinda hanging out with each other the whole time - where ever the big one went - the little one followed. It was kind of fun just watching them for a little bit even though I wasn't doing much fishing. Also took a quick movie below.