Today I thought I'd go check out the Orvis "Warehouse Sale" at the King of Prussia Convention Center. They were advertising up to 70% off deals, so what does it hurt to look?

Unfortunately, it was b

eing held side-by-side with a Lilly Pulitzer Warehouse Sale that was mobbed by throngs of crazy women. No joke. There was a staging area before you could go into the LP sale with one of those snake lines that looked like the line to get on at roller coaster at Great Adventure in the middle of July. Had to be at least 500 women waiting in line - all with an unsettling, crazed look in their eyes. It's was as if Oprah was behind the curtain waiting to bestow some of her "favorite things" upon the masses. Anyway, there was no line to enter the Orvis half of the floor, so no worries there.

So once inside, there were some good deals, and some not so good deals to be had. If you like their clothes, I didn't think the deals were all that good. Most clothing was adve 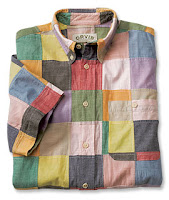 rtised as 50% off original, but when you saw some of the original pricing, just seemed out of whack. Quick example...a pair of Crocs (why Orvis has these, I'm not sure), were "listed" at $70, meaning you could have them for a "steal" at $35. Sorry, that's a crappy deal. Plus, in my opinion, most of their clothes are butt-ugly anyway (see right), so it was a bit of waste in that regard. I did see a nice shell jacket (see below) that "listed" at $150. I'd pay $50 for it, but not sure about $75, so no jacket for me (yet). There were a few good deals on fishing stuff. Reel cases for $5. Fly Boxes for $5. Silver Label Fly line (li 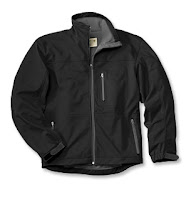 st $45) for $5. The only problem, as expected, was there were no good sizes available. I wanted to get some fly line, but all of the weights were really heavy, like 7 & 8 weight and up, and I wanted 5. Oh well... I think I'm going to go back again on Sunday and see what they have leftover. Maybe they'll relax their prices a bit on the last day. Yeah, Sunday sounds like a plan, it's not like the E-A-G-L-E-S game is going to be interesting anyway...
Posted by Michael Agneta at 10:51 PM