Getting the Hang of This

So along with being a big time fan of spinning tackle - I've listed how much I appreciate great lures like those from Wyld Edge Outfitters, Fish Creek Spinners, Joe's Flies, Mepps, & Panther Martin - I started bending (or is it twisting) my own inline spinners as well toward the end of 2007. Not really to replace the lures from the folks above, but to complement them, especially when I can't run to the store the night before I go out fishing. Previously most of the twisting was done by hand with round nose pliers, but a few months back I picked up a Boggs Tacklemaker, and I have to say it is a great tool.

Once you get the hang of it, you can make almost any type of spinner (given you have the components handy), and the finish on the turns is much better than when I was doing it by hand. Here's a pic of my Boggs, "where the magic happens," that's so MTV Cribs but I couldn't help it!!! 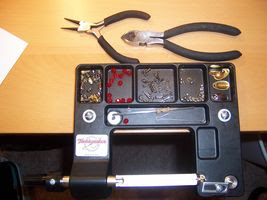 Also some pics of some basic spinners I've made, and incidentally fished with success so far. I've especially had good fortune using the type with the red bead in the middle. Took a handful of those out a couple times to Skippack Creek and pulled in some holdover Rainbows, as well as a few small, smallmouth bass. 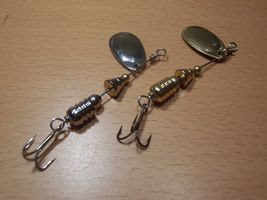 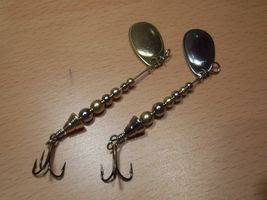 Posted by Michael Agneta at 2:37 PM