So I (along with about a dozen others) was selected in conjunction with WhereIFish.com to be a prototype rod tester for Acadia Sports' new line of rods. It's a neat opportunity to try out a product, give honest feedback, BEFORE it goes to market. I have my own thread at WhereIFish where I'll be posting my feedback and the initial review is below.


Initial Impressions:
So finally have the time to make my first quote on my initial impressions. I was sent a RMS-601-MH 6' MH Spinning Rod. Being a trout guy, this is a little stiffer rod than I'm accustomed to using, but by the end of this test period, maybe I'll become a bass fisherman. 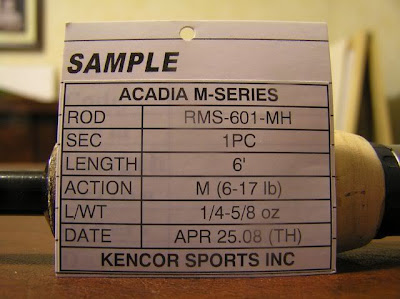 Shipping:
As I mentioned in my previous post, the rod came quick. And I've got to say it came packaged in a "bulletproof" cardboard mailing tube. I've ordered some rods on the internet before, many coming loosely in an oversized cardboard box. Sure, they got there OK, but this packaging gives me no doubt that any rod would make in in one piece (or two if ordered that way)
Initial Shipping Grade: 5 (out of 5) 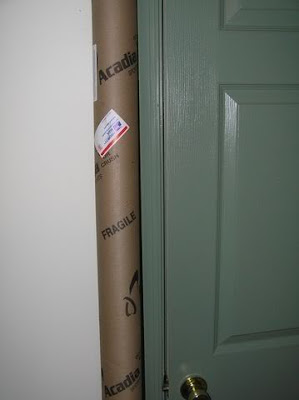 Appearance:
Cosmetically, the rod has a gunmetal gray look throughout. The rod is a matte gray, and even the guides are a similar tone. It's not offensive, but I don't think it's really attractive either. The only markings are a small Acadia Sports decal above the handle. The rod blank under the right light also slightly reveals the texture of the graphite beneath. I hope this cosmetic is just for the prototype, and the final production model has a little more upscale look.
Initial Appearance Grade: 3 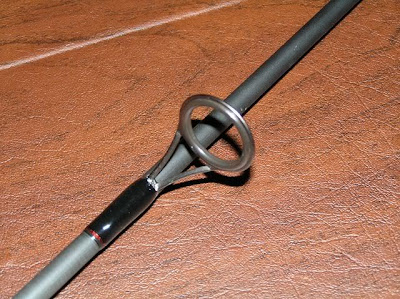 Components:
Obviously, there's only so much you can tell about the components without fishing the rod, but everything looks pretty top rate. First off, this rod is LIGHT. Featherlight. I have a somewhat high end All Star rod, and the weight compares favorably, if not lighter.

The cork handle looks & feels comfortable my hand. The reel seat also appears to be made solidly. I've for the time being, I've paired the rod with a Daiwa (will probably go and buy an Acadia) spinning reel, and it fits well. Not too loose, and not overly snug where it had to be forced. 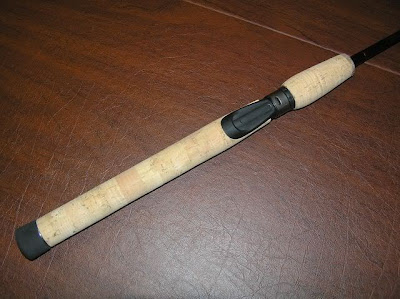 There is a foam butt cap that screws off, I assume to accommodate a weight kit, that appears to extend the overall profile of the rod a bit beyond 6'. I've never used a rod with this option before, so I doubt I will in the testing either. 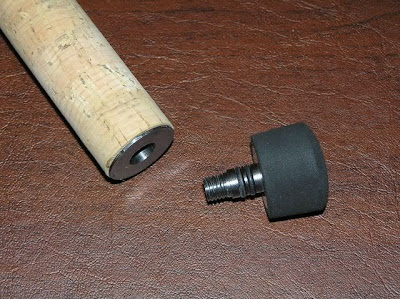 The rod blank is stiff, as to be expected from a MH rod almost all the way down to the tip. To say this rod has a backbone would be an understatement. The last guide on the rod tip seems maybe a little bit larger in diameter than normal - as I compared it side to side to another 6' rod I own (Quantum), and the 6'-6" All Star rod previously mentioned. 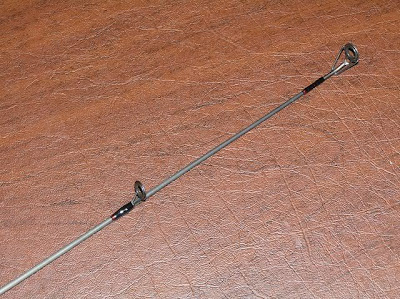 The only issue, upon initial inspection is the absence of a hook keeper. Not a huge deal if the rod performs great, but something you don't realize how much you'll miss until it's not there.
Initial Components Grade: 4 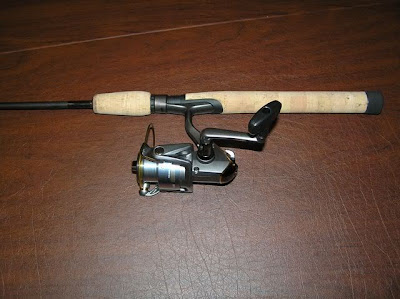 -or-
http://www.whereifish.com/thepond/showthread.php?t=3816
Posted by Michael Agneta at 9:46 PM